Archive for the ‘Meme’ Category

Kathleen at  http://autismherd.blogspot.com/ was sweet enough to tag me in a “sort of ‘what do you have by your bed to read’ meme.  The rules are that you have to take a picture of the books….explain a little about them…and then tag a few bloggers..” (I copied that bit from Kathleen.)

A few months ago I was going through a phase reading Shakespeare and Dickens – seriously.  Sadly, such is no longer the case.  My current powers of concentration tend to things with shorter chapters and simpler words.  And, truth be told, I don’t get much chance to read in bed these days, which pains me greatly.  Hubby snores more than a bit, and by the time I get into bed at night, I can usually only get through two or three pages of something before nodding off.  So I tend to do my reading during the day or evening sitting in my favorite glider chair that my children have not yet succeeded in breaking, which is located in the room downstairs that I try unsuccessfully to keep to mostly to myself.  Next to the chair I have two little tables, one of which is mostly covered in books (along with some afghan squares, a sewing box for my quilting supplies, and a brush for the cats): 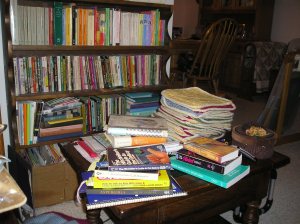 That doesn’t really make it very clear what I’m reading, so here’s a better shot of the books themselves: 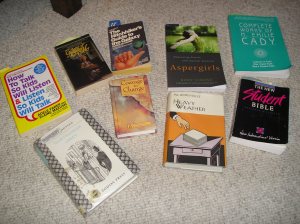 Mostly these are books that I’m just reading a bit at a time, alternating amongst all of them.

How to Talk So Kids Will Listen is something I look at periodically to keep me mindful of how I’m speaking to my kids and to get occasional new pointers.  It’s hard to keep seeing that there really are things I could be doing better with just a little practice.

Next to that is Anne of Green Gables, which I am rereading in hopes of finally moving on to the rest of the series.  Living in a house full of men, I find myself with a need for something girlie every once in a while.

Hitchhiker’s Guide to the Galaxy just makes me laugh and keeps me from taking life too seriously.  I first came across the series as a teenager, and I’m very happy that my two older boys have both enjoyed it so much.

I’m still working my way through Aspergirls off and on.  I have to be in the right frame of mind for exploring this one and asking myself which parts of the book resonate with me and to what extent.  I had taken a break for a little while, but I think I may be ready to pick it back up again.

The green book is a collection of three works by H. Emilie Cady.  It’s spiritual reading that feeds my need for positive input, and I especially like her focus in one chapter on embracing different viewpoints.  There is a Bible below that which I am actually in the process of reading all the way through alternating between the Old and New Testaments.  I got stalled in that for a while, but now I am almost three quarters of the way through.

To the left of that is my latest P.G. Wodehouse book from the Blandings Castle series.  I came across the Wodehouse Jeeves and Wooster television series on PBS because I’m a fan of Hugh Laurie from “House”, who plays Bertie Wooster, but I like the Wodehouse books so much better.  As in the Hitchhiker’s books, so much of the enjoyment is in the narrative, which you really miss in any kind of television or film productions.

The little book left of that is an Alanon daily devotional book.  There’s a great deal of wisdom there, and it’s something I can read even when I’m having a bad day and can’t focus on much of anything else.

The last book is a library copy of Northanger Abbey by Jane Austen.  I’m not enjoying it as much as some of her other works, but I decided I was going to read them all, so I’m doing my best to appreciate what I can.  After that, I plan to move on to Mansfield Park.

There you have it.  And now to inquire about the reading habits of some other worthy bloggers:

So what’s everybody reading?

My first ever award!

My first ever award!

Meme: A relatively newly coined term, identifies ideas or beliefs that are transmitted from one person or group of people to another. The name comes from an analogy: as genes transmit biological information, memes can be said to transmit idea and belief information. (From the Wikipedia entry)

This entry Wikipedia entry and much of this post has been copied from Rachel at  Journeys with Autism.  I figure it’s the least she can do after honoring me with this fine award 🙂  The award was originally created by Jillsmo over at Yeah. Good Times , who had this to say:

“I’ve created an award!! You know those blogger awards that go around the blogosphere, I’ve gotten a few before. It’s nice, to get these things, it means that somebody likes you and wants to spread your word. (That actually sounded kind of gross, “spread your word.” Please don’t spread my word, I like my word the way it should be, the way nature intended, in its original unspread state. But you know what I mean). So, I figured there aren’t enough of these things around, at least, I haven’t been given one for a few months, surely the blogosphere needs another one! (Is “blogosphere” the right word to be using here? It doesn’t look right to me.)

So, I present to you all: The Memetastic Award! Named as such because these things are memes and its purpose is solely to celebrate the memeness of the award giving process. Let’s rejoice in our memeocity by passing this award on to other people! It will be memelicious! Okay, mostly I just want to see what happens, and how far this thing goes. Wouldn’t it just be so cool if an actual meme was created from this? Not very likely, but a girl can dream, right? At this point I’m just hoping it makes it past my own blog.

Here are the rules:

1. You must proudly display the absolutely disgusting graphic that I have created for these purposes (put it in your post, you don’t have to put it in your sidebar, I think that would seriously be asking too much). It’s so bad that not only did I use COMIC SANS, but there’s even a little fucking jumping, celebrating kitten down there at the bottom. It’s horrifying! But its presence in your award celebration is crucial to the memetastic process we’re creating here. If you need a higher resolution version… I totally have one!!

2. You must list 5 things about yourself, and 4 of them must be bold-faced lies. Just make some shit up, we’ll never know; one of them has to be true, though. Of course, nobody will ever know the difference, so we’re just on the honor system here. I trust you. Except for the 4 that you lied about, you lying bastards! But don’t go crazy trying to think of stuff, you’ll see by the example I’ve set below that we’re not really interested in quality here.

3. You must pass this award on to 5 bloggers that you either like or don’t like or don’t really have much of an opinion about. I don’t care who you pick, and nobody needs to know why. I mean, you can give a reason if you want, but I don’t really care.

4. If you fail to follow any of the above rules, I will fucking hunt your ass down and harass you incessantly until you either block me on Twitter or ban my IP address from visiting your blog. I don’t know if you can actually do that last thing, but I will become so annoying to you that you will actually go out and hire an IT professional to train you on how to ban IP addresses just so that I’ll leave you alone. I’m serious. I’m going to do these things. Starting with the 5 of you I’m about to pass this award on to.

5. This one isn’t actually a rule, but once you do the above, please come back here and link up to the Memetastic Hop so that I can keep track of where this thing goes.”

I feel tremendously honored by my inclusion among the other fine recipients.   I feel absolutely comfortable making things up on the spur of the moment, and I have not been at all distracted by having three children fussing at each other continuously in the background while I type.  I have absolutely not thrown this together with undue haste in order to avoid obsessing about it over the entire weekend, and  the stuff I made up here is totally not stuff I’m remembering about old college roomates.

1. I am married to an identical twin.

2. I once participated in accusing Bruce Springsteen of being the father of my unborn child.

5. I’ve read every book ever written by Agatha Christie.

And now, on to the latest new recipients.  The Memetastic Award goes to:

1. Alienhippy’s Blog
2. Mind Retrofit
3. Spectrummy Mummy’s Blog
4. Pancakes Gone Awry
5.  Welcome to the mad house
Congratulations!  (If you have already received a similar award, please just accept this as a token of esteem from a relatively new admirer who’s just too busy to keep up.)